Today’s pic takes us back to one of Timothy’s first speaking parts in “The Long Shot.” It was the episode of Racket Squad that first aired on July 3, 1952. Dim-witted torpedo Frankie has an unwelcome surprise for his boss, Ed Mercer (Edward Keane). 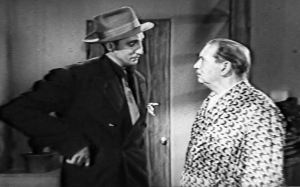 Keane had an uncredited bit part in The Perils of Pauline (1947), which South Dakota Slim would declare his favorite movie in Beach Blanket Bingo (1965).