Our pic of the day takes another look at the Grecophile drug lord known as, appropriately enough, El Greco, from the Baretta episode “That Sister Ain’t No Cousin”. It was first broadcast on January 19, 1977. He has just been taken down by Baretta (Robert Blake) in a nun outfit. It’s a long story. 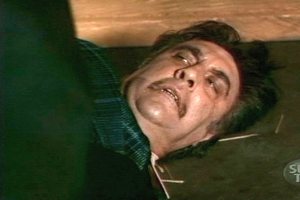 Also appearing here as one of El Greco’s henchmen is Judd Omen, so funny as Mickey, Pee-wee Herman‘s convict pal in Tim Burton‘s Pee-wee’s Big Adventure (1985). Don’t mess with him, he cuts “Do Not Remove Under Penalty of Law” labels off of mattresses! He’s got a really bad temper!