Today’s pic is another from “Encounter at Boot Hill,” the episode of Rawhide that first aired on September 14, 1965. Ill-tempered deputy Ed Walker is being restrained from punching out spineless Jethroe Kane (Peter Haskell). 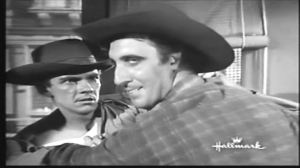 Harvard man Haskell received a Bachelor of Arts degree in English Literature and was on his way to Columbia Law School when he appeared off-Broadway in The Love Nest. He forged a solid career in television from the 1960s up until his death in 2010. In the early 1980s he finally attended New York Law School while working in the city in soap operas.

2 responses to “Pic of the Day: “Encounter at Boot Hill” revisited”