Our pic for today is a rarely-seen color transparency for Shock Treatment (1964), the weird psychological thriller directed by Denis Sanders and starring Stuart Whitman. This pic is unusual for several reasons. Firstly, the film is in black and white. Secondly, Lauren Bacall does not appear in the final version of this scene in the film. However, Romeo Carey has a black and white promotional still from the film that shows almost this exact scene, with Timothy very clearly in view as the patient seated at the table behind them (you can see his head just above Roddy McDowall‘s here). 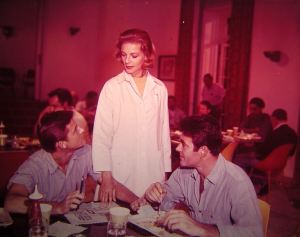 Tim’s brief, uncredited role as a vitamin-and-mineral-conscious mental patient is another one of those tiny bit parts that he marked with the indelible “Timothy Carey” stamp. Again, you spend the whole rest of the film hoping – even certain – that he’ll turn up again. Alas, it is not meant to be.