Our pic for today revisits Crime Wave (1954), aka The City is Dark, filmed in 1952 by Andre’ De Toth but released in 1954. Timothy and Gene Nelson are being hauled away by Sterling Hayden and Mack Chandler, as Phyllis Kirk looks on. Tim has just taken an epic tumble down a flight of stairs, apparently with no stunt man. 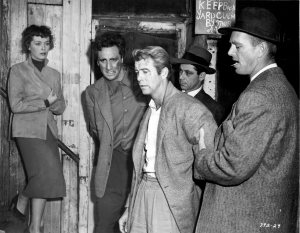 I can’t emphasize enough what a great film this is. If you haven’t seen it yet, shame on you.