ACK! I knew there was one I forgot!! One last death scene, folks. This is from Bert I. Gordon‘s The Boy and the Pirates (1960). Morgan the pirate has just been shot by Captain Blackbeard (Murvyn Vye) as Hunter (Than Wyenn) wonders if he’s next. 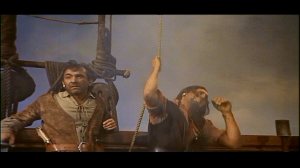 In his autobiography, The Amazing Colossal Worlds of Mr. B.I.G. (2009), Gordon wrote about the challenge of writing an unnamed “pirate actor” (which he later confirmed to me was indeed Timothy) out of the film, due to what he described as borderline violent behavior with the film’s young star, Charles Herbert. “When I gave him the new pages the next day,” Gordon relates, “he asked me how he could get killed in the beginning of the movie when, according to the screenplay, he appears in the rest of the film, until the end. Of course I lied. I told him the new scene was to be a new ending with his death at the very end. He bought it, and we quickly set up the scene on the ship’s deck… filmed it in record time… and our production manager quickly handed him his notice of completion.” Strange thing is, Morgan’s death does come very close to the end of the film. Herbert talked about his experience working with Tim here. He doesn’t mention Tim being too rough with him on the set, but he did find him rather scary!