Today’s pic is another from Chain of Evidence (1957), one of the low-budget crime dramas starring former Western star “Wild Bill” Elliott as Det. Lt. Andy Doyle. Timothy’s bad-tempered Carl Fowler is confronting the man who gave him that scar, Steve Nordstrom (Jimmy Lydon). Tim must have filmed this around the same time as Francis in the Haunted House (1956), as he’s sporting basically the same flat-top haircut in both. 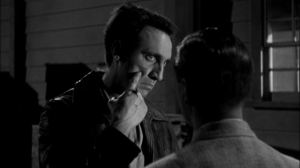 To completely change the subject, I’d like to take this opportunity to congratulate Tim’s son Romeo Carey and his wife on the recent birth of their third child, daughter Prima! Timothy has a new grandchild. That warms my fuzzy little heart.