Today we take a long-overdue second look at “Fortune City,” the episode of It Takes a Thief that first aired on February 2, 1970. Timothy is Art, the enforcer of a gang out to sabotage an underground atomic test in Nevada. Here he shows his displeasure with Harvey, the leader of the gang (Broderick Crawford), who has just told him to stop putting booze in his morning coffee. 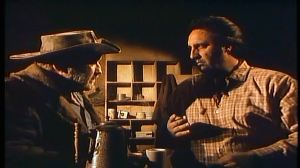 Tim and Crawford both appeared in Convicts 4 (1962), although not together. How great it would have been to see these two characters act together more often.