In honor of today being Elvis Presley’s 78th birthday anniversary, today’s pic is another from his last theatrical film, Change of Habit (1969). Timothy appears in an uncredited role as the manager of the Ajax Market, who is not very sympathetic to his customers. 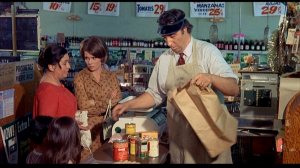 It’s a shame Elvis and Tim shared no screen time together, but they did have an encounter on the set. As Tim related in the Grover Lewis interview, “[Elvis] came up to me and said, ‘Aren’t you Timothy Carey? Didn’t you do The World’s Greatest Sinner? I said, ‘Yes.’ He said, ‘I always wanted to see that show. Do you have a 16mm version?’ I only had a 35mm, but we proceeded to talk about it. He knew all about it. I only had four prints. That was one of the reasons that I didn’t send it.” I’m sure Elvis was dying to check it out, given that God Hilliard’s rock and roll persona was obviously inspired by Elvis. I wonder if he ever got a chance to see it?