This is from the extras (Film Noir Web, disc 2) on the Reservoir Dogs (1992) tenth anniversary special edition DVD 2-disc set. The Kazan and Brando stories are apocryphal; Timothy always denied they took place. Also, Tim passed away not on his own birthday (March 11), but on the birthday of one of his heroes, Salvador Dali.

A lanky, saturnine character actor most famous for his work with Stanley Kubrick in PATHS OF GLORY… and most infamous for being the only man director Elia Kazan ever physically attacked on-set. Marlon Brando stabbed Carey with a pen on the set of ONE-EYED JACKS. John Cassavetes, who cast Carey in THE KILLING OF A CHINESE BOOKIE, declared that the actor had “the brilliance of Eisenstein” – after Carey put Cassavetes in a padded suit and turned an attack dog loose on him, during the actor/director’s first visit to his home.

Carey’s six-foot-five stature and laconic demeanor served him well in a number of tough-guy and character bits, and he later become a television regular on such shows as MANNIX, BARETTA, ELLERY QUEEN and CHiPS. He was apprehended scaling the fence at 20th Century-Fox in full armor, just to audition for PRINCE VALIANT, and later faked his own kidnapping while in Germany, during the shooting of PATHS OF GLORY.

His magnum opus was THE WORLD’S GREATEST SINNER (1962) – made nearly single-handedly over three years and released in 1962. Carey wrote the story of an insurance salesman who goes into politics and develops a God complex, then directed and starred. It featured a score by iconoclastic genius Frank Zappa. A second feature, TWEET’S LADIES OF PASADENA, remained in production from 1972 onward (Carey turned down a role in THE GODFATHER to work on it), but was never completed.

Carey also appeared in Kubrick’s THE KILLING, EAST OF EDEN, CRIME WAVE, and THE OUTFIT. 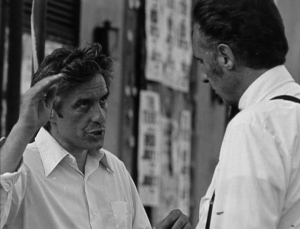 Cassavetes directing Tim in The Killing of a Chinese Bookie (1976)