Our pic for today (and don’t forget for all pics, you may click to embiggen) is another from “Home to Methuselah,” the episode of The Virginian that was first broadcast on November 26, 1969. It’s always good to see Timothy laughing, even if it’s the desperate laugh of a doomed outlaw. 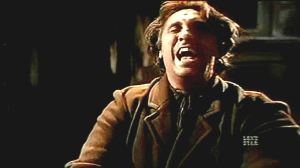 Tim must have gotten a firm hand from director Abner Biberman, for this is one of his most straight-ahead, low-key (and yet extremely effective) performances. Tim appreciated and in fact needed strong guidance from his directors, or he tended to feel rather lost. At the same time, he seemed to work best with directors who were willing to let him improvise and embellish his characters as he saw fit. Biberman was up to the task; he was another hard-working television director who began his career as a character actor in the 1930’s. I’m willing to bet the two men related to one another.