Our pic of the day revisits Curtis Harrington‘s What’s the Matter with Helen? (1971), the enjoyable creep-fest starring Debbie Reynolds and Shelley Winters. Timothy has a memorable cameo as a shabby bum begging for a handout in Depression-era Los Angeles. When Reynolds opens the door, this is the first thing she sees. Yikes!! 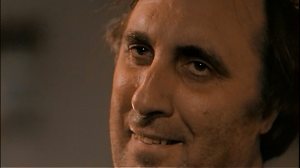 Tim had appeared previously with Reynolds in The Second Time Around (1961). It was during the making of that film that he met young Frank Zappa and hired him to write the score for The World’s Greatest Sinner (1962). You know the rest!