Crime Wave (1954), also known as The City is Dark, is one of the greatest examples of film noir that we have. Directed by Andre’ De Toth, it’s got a docudrama feel; the script is tight and snappy; the cinematography is crisp, perfect black and white; the editing is stellar; the cast is amazing; and the characterizations are top-notch. It was shot in 1952 but not released until 1954. Timothy’s giggling hop-head Johnny doesn’t appear until the final half hour or so, but he nonetheless manages to walk away with the film quite handily. He must have really annoyed some of the higher-ups behind the scenes, for he received no screen credit for what can truly be considered his breakout role. Here he is making his intentions toward Ellen Lacey (Phyllis Kirk) unmistakably clear. 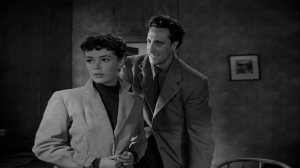 When I visited Tim’s studio in El Monte in July, there was a still on the wall from this film, showing Johnny kissing Ellen full on the lips. This shot is wisely not in the film; to me the menace is more effective if he doesn’t actually follow through, or at least is not shown doing so. But it may, however, provide a clue as to why the part is uncredited. As Tim wrote in his remembrance of James Dean, “I affected a twitch like a narcotics addict, I turned on a low, sensual, half-crazy laugh, gritted my teeth and dug my hands into her shoulders – just like the creep I was portraying would have done in real life. But Phyllis wasn’t impressed with my realism. She found me too convincing. She broke and got hysterical. I had to go apologize to her, although I don’t know what I was apologizing for.”

2 responses to “Pic of the Day: “Crime Wave” revisited”