Today we feature two pics from the April 1958 issue of the Brazilian movie magazine CineRevelação. This unique magazine took popular films of the day and gave them the fotonovela treatment (similar to a graphic novel, but with photographs instead of drawings), with stills from the film and speech balloons. This issue features James Dean in East of Eden (1955), or as it is known in Portuguese, Vidas Amargas. Here we see the two pages that feature Timothy’s character prominently. 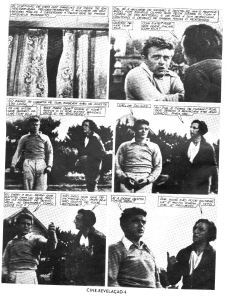 My apologies for the poor photo quality, but it was bad to begin with (also for my substandard scanning abilities). The fotonovela has a long history in Latino culture and is certainly worth investigating. It’s kind of cool to imagine Timothy and Dean speaking Portuguese!