It’s time to take another look at the very first Baretta episode, “He’ll Never See Daylight,” which first aired on January 17, 1975. Timothy is garrulous gangster Matty Trifon, encouraging his dinner companions to eat, drink and be merry at a Middle Eastern restaurant. What he fails to notice is Baretta himself (Robert Blake) lurking over his shoulder, in disguise as a fez-topped waiter. I am not sure who the actress portraying Matty’s bemused girlfriend is. 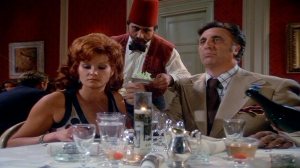 Romeo Carey told me that Tim once said that you could tell a person’s character by how well they spoke about their father. Blake, according to Tim, spoke disparagingly about his father. Tim also called Blake “a wise guy.” Glean from that what you will.