Today we revisit Timothy’s vaguely Russian/Middle Eastern gang leader in “Angels on Ice,” the Charlie’s Angels episode that first aired on September 21, 1977. He has just come to the realization that the rather awkward belly dancer who has been entertaining him and his gang is, in fact, that pesky spy girl Kelly (Jaclyn Smith). 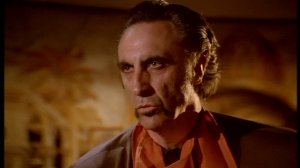 Timothy built up quite a roster of guest appearances on television during the 1970’s – Charlie’s Angels, CHiPs, Baretta, Ellery Queen, the list goes on. Each one was given the unmistakable Carey treatment; he never just walked through a role, no matter how small. He once said that each role he played could very well be his last, so why not strive to make it his best? Why not, indeed.