It’s time for yet another look at Bayou (aka Poor White Trash) (1957), directed by Harold Daniels and starring Peter Graves, Lita Milan, “and presenting Tim Carey” (as the movie poster says)! Ulysses and his sidekick Bos (Jonathan Haze) are talking about the impending storm and something crazy Ulysses saw during the last storm, if I’m not mistaken. 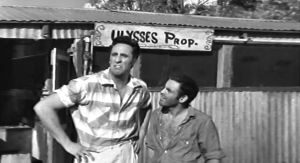 Timothy always did well when paired with slighter-statured actors to play off of Mutt-and-Jeff style, and Haze was one of the best. He endeared himself to legions of cult film fans everywhere as the hapless Seymour of Roger Corman‘s The Little Shop of Horrors (1960); he and Corman made many a film together. In his later years he became the head of a company that produced commercials.

2 responses to “Pic of the Day: “Bayou” revisited”