Today we revisit “The Long Shot,” the episode of Racket Squad that provided Tim with one of his first speaking parts in Hollywood. It also marked his first outing in a role that would become one of his staples – the boss’ torpedo. “The Long Shot” was first broadcast on July 3, 1952. Frankie, not the sharpest knife in the drawer, thinks he has done his boss (Edward Keane) a favor. Nothing doing. 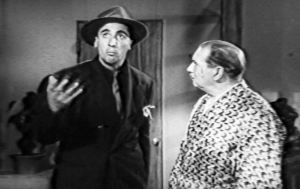 Keane was an extremely prolific character actor. He appeared in scores of films, mostly in uncredited bit parts, from 1921 right up until his death in 1959.

14 responses to “Pic of the Day: “The Long Shot” revisited”