Having recently seen and enjoyed American Grindhouse (2010), I hastened to add Grindhouse: The Forbidden World of “Adults Only” Cinema (1996) by Eddie Muller and Daniel Faris to my book collection. Imagine my surprise and delight when I received the book and found two pages dedicated to Timothy! Maybe it’s me, but Muller and Faris don’t seem to be quite as enamored with Tim as I am – or at least not quite as forgiving of his foibles (see the caption for the above photo [click to embiggen], taken I believe in 1956 when Tim was shooting footage for his script AL). But it’s still a darn good read and worth your time.

The piece also pointed me to an interesting news item I hadn’t seen before. While promoting The World’s Greatest Sinner in 1965, Tim was a guest on the notorious Joe Pyne‘s radio show. Pyne was the original “shock jock,” deliberately antagonizing his guests and listeners to get a rise out of them and boost ratings. The book stated that Tim’s appearance on the show “resulted in a fist-swinging melee’ in the audience.” This would seem to imply that Tim was a guest on Pyne’s television show, but no evidence of that can be found at this point. The following article from the Reno Evening Gazette, dated September 23, 1965, tells the story: 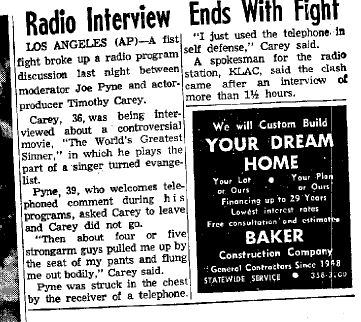 Whether this actually happened or was just a publicity stunt has been lost in the mists of time.

The Grindhouse book was published in 1996, only two years after Tim’s death, so it perhaps can be forgiven for reporting some familiar inaccuracies. In fact, it may have become the basis for some of them (i.e., Tim being born in El Monte [he lived most of his adult life there, but he was born in Brooklyn], being physically attacked on-set by Elia Kazan and Marlon Brando, etc.). Many people have said in so many words, “If only Timothy had played the game, he could have been a big star.” He wasn’t interested in “playing the game,” so in the minds of many he’s been written off as a crackpot and a joke, just a footnote in the annals of Hollywood. That is too bad. These people are depriving themselves of a real treasure.

One response to ““A True Visionary Crackpot””