Today’s pic takes another look at The Wild One (1953), directed by Laslo Benedek.  The party’s over, the jig is up and Timothy and his gang must now pay the price for their shenanigans. 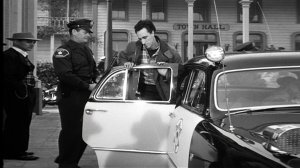 The Wild One seems rather tame today. It’s easy to forget that it caused quite a stir when it was released at the very end of 1953. Youth has always been rebellious, but this film seemed to herald a new kind of rebellion that truly made people nervous. Timothy caught wind of this attitude early on, and he explored some of its ramifications in The World’s Greatest Sinner (1962).