Our pic for today takes another look at The Man From U.N.C.L.E. episode “The Deadly Quest Affair,” which was first aired on October 30, 1967. Timothy, as the boss’ torpedo Stefan, is being persuaded to think twice about his situation by Illya Kuryakin (David McCallum). 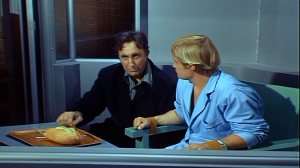 Also co-starring here is the great Darren McGavin as Stefan’s boss, recurring villain Viktor Karmak. Timothy appeared in the pilot episode of McGavin’s series The Outsider (1968), which continues to elude me to this day. Sigh.