Starting off the week is another shot from Bikini Beach (1964), featuring Tim’s first appearance as pool-cue-slinging South Dakota Slim. Slim has only one scene here, but he returned the following year with much more screen time in Beach Blanket Bingo (1965). 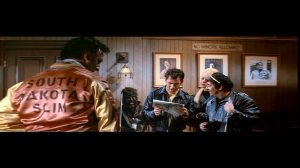 I chose this shot so we could get a good look at that personalized jacket. Also appearing from left to right: Val Warren, Andy Romano, Alberta Nelson and Harvey Lembeck.