I never walk through a scene. Whatever I do I do with enthusiasm – and it didn’t take me long to find out that the more enthusiastic I got about my work the less enthusiastic some of my fellow players got about me. Maybe you remember Marlon Brando in The Wild One. Well, in that picture Lee Marvin was the number one heavy, and I was his sidekick. When he and Brando got into a brawl in the big mob scene, I was supposed to push Marvin onto Marlon. I did it like the picture said I was supposed to – like I hated Brando’s guts and I wanted Marvin to claw him apart. As I said, I played the scene with enthusiasm, but Brando didn’t seem to appreciate it. He finally turned to director Laslo Benedek and said, “Get that guy off the set. He makes me nervous.” 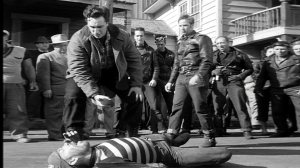