We start off the week with another look at the Tenspeed and Brown Shoe episode “The Treasure of Sierra Madre Street,” first airing on June 20, 1980. Tim and his real-life pal Michael C. Gwynne are busting out of the mental hospital in pursuit of buried treasure. It’s a long story. 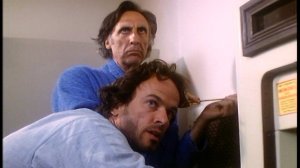 Tim and Gwynne first worked together in Steve De Jarnatt‘s short film Tarzana (1978), from which the famous outtake known as Cinema Justice was derived. Both of these gems are due for an official release, hopefully very soon. Keep your fingers and toes crossed, and watch this space.