Today’s pic takes another look at Tim in his last television appearance. The show was Airwolf, and the episode is “Tracks,” first broadcast on March 22, 1986. Tim is Paul McClelland, “the Cat Man,” who lives in the mountains with the wildcats he has vowed to protect by any means necessary, including giant hunting bows. 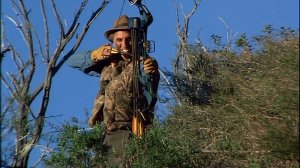 Tim’s major co-stars in this episode are his teeth. He bares them quite a bit here. It’s scary and awesome.