Our pic for today is from the second of the two episodes of Gunsmoke that Tim appeared in. This one is “Quaker Girl,” first broadcast on December 10, 1966 and directed by Bernard Kowalski. Tim is “Buster” Rilla, Ben Johnson‘s muscle man, doing what he does best – pushing people around, including a fellow named William Shatner. 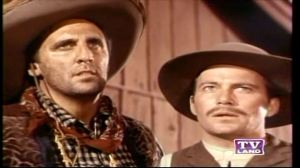 There they are – two of the biggest hams who ever lived, God love ’em. Many thanks to Paula Vitaris over at the Ben Johnson Screencaps Page for the screen cap!