Our Pic of the Day for today is from the second of Tim’s appearances on The Greatest American Hero. The episode is “The Resurrection of Carlini,” which first aired on November 19, 1982. He portrays Blanchard, the late great magician Carlini’s former assistant, who is keeping the spirit of his boss alive in a rather creepy way. 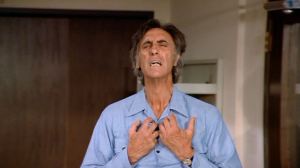 They should have tried to get this one aired closer to Halloween; it would have fit right in! Tim was a big fan of Halloween, by the way.