Today’s pic is from the first of Tim’s two appearances on the rather silly action/adventure series The Greatest American Hero. The name of the episode is “Fire Man,” and it debuted on May 6, 1981. It was directed by Gabrielle Beaumont, who holds the honor of being the first woman director in the Star Trek franchise. Tim portrays a shady auto yard owner by the name of Cameron. 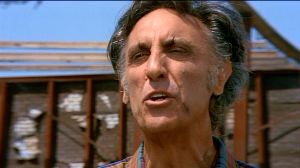 He’s got that crazy facial hair action going on again!