I know I’ve already posted a pic from this one, but I recently got ahold of this publicity still from the film, and it’s too weird not to post. Tim is barely visible as one of the gang beating up a shirtless Rory Calhoun. 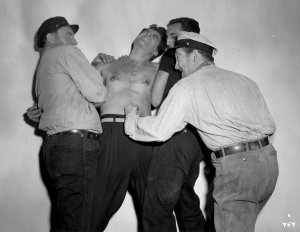 The fellow in front is Bob Hopkins, whom I always think of as resembling Errol Flynn gone to seed. The weird thing about this photo is, there is no scene in the film that even comes close to resembling it. Tim and his gang never beat up Calhoun, and Calhoun keeps his shirt on throughout the film (unfortunately). You can see a weird little version of this on the poster for the film. It’s just one of those strange Hollywood moments, I guess.