Our pic for today comes to us from John Flynn‘s The Outfit (1973). Tim is Jake Menner, a truly nasty thug about to have some serious mayhem committed on his left hand by the man holding the gun, Earl Macklin (Robert Duvall). 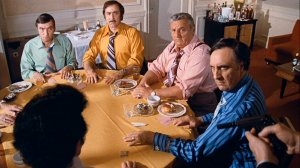 Tim was usually able to lend a note of humanity to even his most low-life characters, but Menner is a mean, rotten piece of work. He participated in the torture of Macklin’s girlfriend Bett (Karen Black) and the murder of Macklin’s brother (both of which occur before the film begins). There is nothing redeeming about him, except perhaps for his fashion sense and for the sheepishly subservient way he approaches his boss (Robert Ryan). One of Tim’s best and nastiest performances – don’t miss it.